Recently I was able to fix the "stuck in the bootloader" issue in #322 that had been plaguing us for quite some time. I want to go over what the issue was, how the issue was diagnosed, and how it was fixed.

Going into this, all we knew was that this issue was most likely introduced somewhere in the #133, which added Bluetooth profile management. We've had quite a few attempts at trying to recreate the issue, but we never were able to get it to happen consistently.

This issue had been happening sporadically for the past month, and I finally decided to dig in to see what was going on. We started in the Discord and discussed what was common between all of the people who have experienced this issue. Everyone who had this issue reported that they did quite a bit of profile switching. This lined up with the possible connection to the Bluetooth profile management pull request.

I had a hunch that this was related to the settings system. The settings system is used by profile Bluetooth switching, and the settings system works directly with the system flash. Based on this hunch, I tried spamming the RGB underglow cycle behavior on my main keyboard. Sure enough after a couple minutes, I got stuck in the bootloader. I was even able to reproduce it again.

This was an important discovery for two reasons. First, I was able to recreate the issue consistently, which meant I could set up logging and more closely monitor what the board was doing. Second, this more or less proved that it was specifically the settings system at fault. Both Bluetooth profile switching and RGB underglow cycling trigger it, and the one common piece is they save their state to settings. 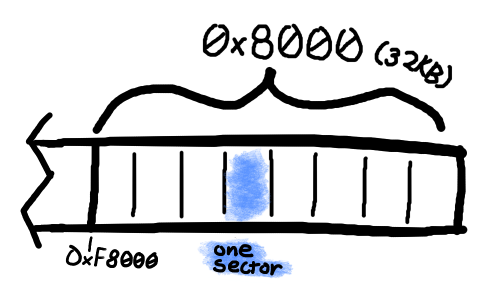 The settings flash space lives at the end of the flash of the chip. In this case it starts at 0xF8000 and is 0x8000 bytes long, which is 32KB in more comprehensible units. Then due to the chip's architecture, this flash space is broken into pages, which are 0x1000 bytes in size (4KB).

The backend that carries out the settings save and read operation in ZMK is called NVS. NVS calls these pages sectors. Due to how flash works, you can't write to the same bytes multiple times without erasing them first, and to erase bytes, you need to erase the entire sector of flash. This means when NVS writes to the settings flash if there's no erased space available for the new value, it will need to erase a sector.

So first I enabled logging of the NVS module by adding CONFIG_NVS_LOG_LEVEL_DBG=y to my .conf file. I repeated the same test of spamming RGB underglow effect cycle and the resulting logs I got were this:

So at start up, we can see that the 8 sectors of 4KB are found by NVS properly, however, I wasn't sure what the second and third lines meant, but we'll get back to that. Nonetheless the next two logs from NVS showed erasing the sector at 0xFD000 and then erasing the 0xFF000 sector.

It's really odd that the third to last sector and the last sector are erased, and then shortly after the bootloader issue is hit. I really had no explanation for this behavior.

Reaching out to Zephyr#

At this point, I nor anyone else working on the ZMK project knew enough about NVS to explain what was going on here. Pete Johanson, project founder, reached out on the Zephyr Project's Slack (ZMK is built on top of Zephyr if you weren't aware). Justin B and Laczen assisted by first explaining that those alloc wra and data wra logs from earlier are showing what data NVS found at startup.

More specifically, data wra should be 0 when it first starts up on a clean flash. As we can see from my earlier logging on a clean flash I was instead getting f40. NVS is finding data in our settings sectors when they should be blank! We were then given the advice to double check our bootloader.

Most of the boards the contributors of ZMK use have the Adafruit nRF52 Bootloader, which allows for extremely easy flashing by dragging and dropping .uf2 files onto the board as a USB drive. Every bootloader takes up a portion of the flash, and in the README explains that the first 0x26000 is reserved for the bootloader with the nRF52840, and we've properly allocated that.

However, there isn't a full explanation of the flash allocation of the bootloader in the README. There's a possibility that the bootloader is using part of the same flash area we're using. I reached out on the Adafruit Discord, and Dan Halbert pointed me towards the linker map of the nRF52840. Let's take a look.

Here's a diagram to show this a bit better.

This also shines some light on why NVS erased 0xFD000 and 0xFF000 sectors. It's possible there was no flash written to 0xFD000 because the bootloader didn't use up all of that space it has, and then there possibly weren't any bootloader settings set yet, so 0xFF000 could be used and erased by NVS too.

Now that we've found the issue, we can pretty easily fix this. We'll need to move the settings flash area back so that it doesn't overlap with the bootloader. First we calculate the size of the of flash area the bootloader is using.

So the bootloader is using the last 48KB of the flash, this means all we need to do is shift back the settings area and code space 0xC000 bytes. We'll apply this to all of the .dts files for the boards that were affected by this issue.

And with those changes, we should no longer run into this issue! In the process of these changes, we lost 48KB of space for application code, but we're only using around 20% of it anyways. 🎉